"In June 2016, the United Nations High Commission on Refugees (UNHCR) reported that at the end of 2014, there were 59.5 million refugees in the world - the highest number ever recorded. The last time the world saw numbers anything like this was World War II.

To put this another way, one out of 122 people is either a refugee, seeking asylum, or internally displaced (meaning they fled their home but are still in their home country). If this population were its own country, it would be the 24th largest in the world (squeezing in between Britain and Italy).

Refugees are escaping war and persecution in several different countries, but the country with the largest number of refugees is Syria, where, according to Amnesty International, over half the country’s population is now displaced."
By the end of this project every student will be able to explain why the Syrian Refugee Crisis is happening, how the world is responding to it, what we can learn from the refugee crises in the past, who the "United Nations" is and what they do.
Each student was representing a country and was a delegate in their commitie. There were 6 committees in total and I was in #4.  Each committee has a chair, co chair and might have a page. I was a chair for the whole project so I didn't represent a country I represented the "Untied Nations".

I was first introduced to being the chair one day when my teacher Dr P had emailed 4 people from our team to come to a lunch meeting regarding MUN and the leadership committee. I was very surprised and confused when I got the email, I thought to myself why he would ever chose me, it could have possibly been a mistake but I went to the lunch meeting. He then explained to us what our role would be if we agreed to sign up for the committee. We had to fill out and application that asked us questions including if we would be able to go after school to research and work together to get prepared for the conference, and why we would be interested in joining, etc. I just remember I wasn't sure if I really wanted to do it because I am not very interested in politics and debating, but I thought to myself I would have to do that anyways if I wasn't chair and would have to debate in the conference as a country. So I thought of the pros, If I were chair I would be on top of the game and kind of be a mentor to everyone who was a delegate, I would get extra credit on my grade, and it would be easy since I am just running the debate. The cons were I would have to lose a day from my track practice since we have to go after school ever Wednesday, maybe I would space out during the conference since it won't interest me much and I didn't really know much about politics, and I have to do a lot of work because I need to have a general idea of all the countries not just focus on one. I ended up agreeing to do it which was a big step for me because I don't usually do things like this and extra curricular education classes, especially being part of a committee so it was different and out of my comfort zone. I was told we get an email to see if we would got in, I honestly thought I wasn't going to be accepted. Surprise surprise, the email came in. The first meeting was not bad, but I was a bit shy since I didn't really know much people and thought I was the only one who didn't know anything about the crisis happening right now or about politics. But then I noticed I wasn't alone and some people were as nervous as I was so I felt a bit more comfortable. That day for and hour we just ended up researching and adding information into a document, we also chose our positions for the conference. Throughout the weeks I was assigned to teach "workshop" for our class, So some days I showed presented a slide show the was created for us to teach our class about a topic to get prepared for the conference. We did one about the procedures and vocabulary, one about position papers, we also did a mock conference. I got a bit nervous the first time to present to my class because I didn't want everyone to talk over me since my voice is a little lower because I tend to be shy or if I said something I wasn't suppose to or someone asked me a question I couldn't answer it would be embarrassing. But I noticed each time that if I pretend confident they will take me seriously, kind of like fake it till you make it. On a regular work time day I would research about all the countries allies and stance with the topic, I wrote notes in my notebook about everything. Sometimes I would go around asking people what they were doing so I can get a feel for their country. I felt so cool sometimes because during work time or work shops people would ask me questions they had and I would be able to answer them, it left me feeling like I actually new things and like if I were a teacher and that is an awesome feeling! On the last few weeks I worked a lot with my Co-chair and we edited our scripts to a way we could understand easier during the conference.

The Day of The Conference

On the first day I was very nervous because I wasn't sure if I was going to do great and be strict enough or even speak loud enough. But I went in the room and just pretended to be a lawyer and read the script loud and proud. People respected me and it felt really good because they would listen, I mean they also had to because I was going to be grading them but thats besides the point. When we would go into Unmoderated Caucus I would go around writing notes on what people were saying and who was contributing. Sometimes some people set a speaking time to be very short and I had to cut them off and it felt bad but it also felt good because it was like I was in charge. The first day went really well and better than I expected and the debate was always awake which was good, I thought a whole day to do it was going to be way to much and we wouldn't know what to talk about. The second day I came feeling even better, I actually liked being the chair. When we finished the debate it felt so good because it was over and I felt accomplished, but I was also kind of sad because I wanted to keep doing it and leading the debate which was very surprising to me. All in total I had a great time and I am very happy that I joined the committee because I never thought I would do something like this or be interested in it. And I learned a lot, I also feel like my confidence and leadership level boosted up. And I am going to do this next year to for the freshman soon to be sophomores! Next year I would probably just memorize this script a little bit more and I would want to give a bit more info to the students since I already experienced it how it will feel and to not stress out. I think next year we should give them a bit more time to help critique each others work and make sure they have it done by the conference. 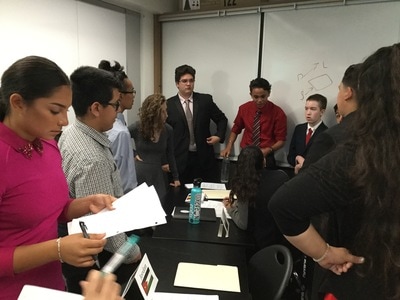 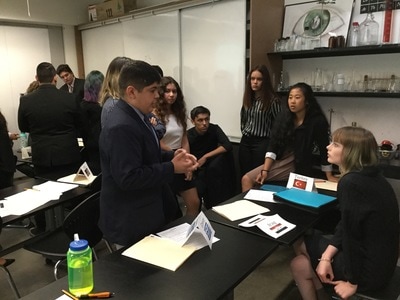